Inspections carried out on 24 March 2004. Includes details on the condition of the sculptures and any proposed maintenance

Information on making an application to The Summerfield Charitable Trust

"A Foot & Mouth Recovery Plan for the Forest of Dean District. A Submission to the South West of England Regional Development Agency by the Forest Regeneration Partnership"

Annotated. Referred to as "Appendix 13"

Article "Social Exclusion in the Countryside" by Dr Bill Slee, University of Aberdeen

Guidelines for applicants to The Charles Hayward Foundation

Possibly published in The Forester

Written by Julian Davies. Includes introduction; on site facilities; the artist and their work; how to use this pack; worksheets; case studies for key stage 1, 2 and 3. Sculptures included are Place/ Giant's Chair by Magdalena Jetelová; The H...

Letter from Forest Enterprise to Martin Orrom regarding the teachers packs

Printouts from the ITEM knowledge base

Printouts of content from the ITEM knowledge base including homepage; about ITEM; adding and updating entries; subscriptions; feedback; online resources; art gallery and museum directories; intellectual property and copyright; index of titles. Als...

Correspondence between Jeremy Rees and Espresso Education, a company collecting websites relevant to the National Curriculum to be accessed by schools via subscription to their servers

"Benchmarks: Ideas in the Making" by Val Millington and David Kay

Published by Southern Arts and South West Arts. Details the outputs from a design workshop on concepts for outdoor seating. In collaboration with Forest Enterprise and discusses designs commissioned for the Sculpture Trail

With timetable of events by county. Includes details of Neville Gabie, artist in residence at the Sculpture Trail 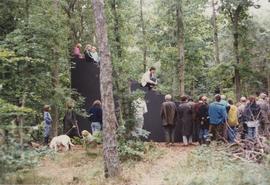 Photograph of person stood on top of Observatory

The Procession of the Most Noble Order of The Garter

The Procession of the Most Noble Order of The Garter took place at Windsor today, among those invested was Prince Charles. Prince Charles and the Queen mother photographed in Procession after the ceremony this afternoon at WindsorAgency: BIPPA

Prince Charles after his Investiture

Caernarvon, Wales. Prince Charles appears at the Queen Eleanor's Gate of Caernarvon Castle, and shows himself to the people for the first time as the Prince of WalesITN Reference: ROYAL/CHAR/54Agency: Associated Press

Prince Charles dressed in a denim jacket and cap, taking part in a drama performanceAgency: Unknown

Aberystwyth. Prince Charles pauses for newsreel and still photographers, at the door of the old building of the University College of Wales, as he arrives for his first day's study at the Language LaboratoryAgency: Unknown

Prince Charles in uniform on a Welsh Tour

The Queen and Prince Charles at his Investiture

Caernarvon, Wales. The Queen placing the gem-encrusted gold coronet on the head of the Prince of Wales as he kneels before her at his Investiture at Caernarvon CastleBroadcast Date: 24 November 1980Agency: Press Association

Prince Charles in a play at Cambridge University

"No Cold Navels". With flippers on his feet, trousers tucked inside long socks and a gas mask under his coat, the Prince of Wales stands in front of the curtain to deliver a punnish monologue as a weather forecaster in the revue "Qu...

Tokyo, Japan. Britain's Prince Charles is flanked by Japan's emperor Hirohito and Empress Nagako during an audience at the Imperial Palace in Tokyo today. Prince Charles flew into the Japanese capital earlier in the day for a five day un...

Prince Charles getting into his Aston Martin DB6

Berlin, Germany. On the last day of his Berlin visit, Prince Charles of England inspected British units stationed in West Berlin. Here, the Prince aims a bazooka for firing during an exerciseAgency: Associated Press

Nassau, Bahamas. Prince Charles, the Prince of Wales, right, plays polo during his visit to Nassau. He is at Nassau for the Bahamas independence celebrationAgency: Associated Press

The Sailor Arrives Home. Prince Charles arrived back at Chatham today in the Frigate "Minerva" after 10 months service with the Royal Navy mainly in the Caribbean. An amusing incident is shared between Prince Charles and a Royal Marine w...

Even a Royal face can't keep straight when there are Goons about. Prince Charles had a command performance of Goonery on Monday night (11-11-74) at a dinner in London to celebrate the publication of a book of scripts of radio's famous Go...

Prince Charles with the "Goons"

Even a Royal face can't keep straight when there are Goons about. Prince Charles had a command performance of Goonery on Monday night (11-11-74) at a dinner in London to celebrate the publication of a book of scripts of radio's famous Go...