The Library is physically divided into two halves, serial and general publications, and county or country based material. There is material about most counties in England as well as on Wales, Scotland and Ireland. Subjects covered include history, archaeology, architecture, local studies, records, law, education, religion, cults and mythology, arts and crafts, coinage, industry and transport, genealogy and heraldry. The Society mainly concentrates on collecting material relating to Gloucestershire and its adjoining Counties (Herefordshire, Worcestershire, Warwickshire, Oxfordshire, Wiltshire, Somerset and Monmouthshire).

Also includes information on the Townshend family and a letter from Fred Hughes to Mike Skinner acknowledging the deposit, 21 March 2001

On the north-west borders of Gloucestershire, in the years immediately prior to the outbreak of the First World War, a literary community was formed which came to represent a significant development in the modern poetic tradition. By August 1914, the poet and playwright Lascelles Abercrombie, Wilfrid Gibson, and the American poet Robert Frost had all taken up residence in and around the village of Dymock. Inspired by the beauty of their surroundings and encouraged by a succession of visitors, including Rupert Brooke, John Drinkwater, Edward Thomas and Eleanor Farjeon, a new literary currency was established during that final summer before the outbreak of war.

Their writings represented a movement away from the prevailing literary idiom, regarded by many as rhetorically ornate and emotionally restricted. Instead the Dymock Poets sought inspiration in natural settings and everyday experiences. In this, and their desire for a more direct, authentic register, their work can be located within the traditions of Wordsworth and the principles set out in Lyrical Ballads.

It was a productive time for all concerned, with four issues of a periodical, New Numbers, being written and printed as a true cottage industry. This period was also to see the emergence of Edward Thomas as a gifted and prolific writer of verse and to lead to Robert Frost’s formation of a new poetic philosophy.

This brief idyll was to prove short lived. Within three years both Brooke and Thomas were dead, Frost had returned to North America, and Abercrombie, Drinkwater and Gibson were involved in war work. Their writings, however, continue to form an important literary legacy to this day.

The institution has actively sought to collect material from various sources that centres on the Dymock Poets (Edward Thomas, Robert Frost, Wilfrid Gibson, Lascelles Abercrombie, John Drinkwater, Rupert Brooke) and related authors such as Eleanor Farjeon. Items are donated or deposited by a wide range of people, including some of the families of the poets. Material has also been deposited by both The Edward Thomas Fellowship and Friends of the Dymock Poets regarding the administration of both societies.

Handwritten letters, notecards and a programme for the production of "The Two Bouquets" by Eleanor and Herbert Farjeon at Piccadilly Theatre. Also includes Christmas greetings cards from Eleanor featuring poems "St Mary Axe", "The Children's Carol", "Joseph with the Infant Jesus", "A Wish", "The Mother's Song", "Child's Carol", "The Third Joyful Mystery", "Sweet Ass", "A Manger Song" and "The Week After". One notecard sent for the wedding of Lyn and Sanchia is written on a notecard illustrated with doves and dated 25 November 1842 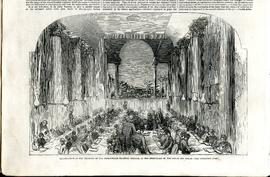 Includes maths work, lists of students' addresses, poems and references from Reverend Bromby and others

Photocopies of letters and cards from friends of Haines. They include thank you letters from children, expressions of sympathy on the death of his father and comments on contemporary literature. Authors include Marion M Scott, C W B Marsh, Madge Balfour, Lilian Gale, Ethel Priday, Dot Whitley and C C Haines

Also includes a letter to Alice from "Papa" dated 1864