A rarely seen photograph of the Queen Victoria, from the archives of Bassano, one of the world's oldest photographic studios. It was taken in 1882; in the background is a painting of Prince Albert, Queen Victoria's "dear one", who died in December 1861. Queen Victoria was born in May 1819 she succeeded to the throne in June 1837 and reigned for 63 years, until her death in January 1901. During her reign the British Empire reached its apogee 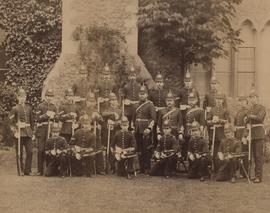 A rarely seen photograph of the Queen Victoria, from the archives of Bassano, one of the world's oldest photographic studios. It was taken in 1887 in the fiftieth anniversary of Victoria's accession to the throne. She reigned another 14 years before her death in January 1901. During her 63 year reign, the British Empire reached its apogee