Newspaper article "Hard to keep clear but... This window IS the view!"

Published in the "Western Daily Press", author unknown. Includes photograph of the attempted cleaning of the sculpture "Cathedral"

"Slasher: Newspaper of the Forestry Commission"

Issue 327. Features article "An Art Spectacular in the Forest" with images of the Forest of Dean Sculpture Trail

The Princess of Wales, representing the Queen, wears a cream and gold "drum majorette" outfit as she inspects a line of newly commissioned Women's Royal Army Corps officers at the 93rd Sovereign's Parade at the Royal Military A...

Picnic cottage in the hills above Balmoral

Prince Edward at the launch of "Knockout: The Grand Charity Tournament" and "The Grand Tournament Game"

"Knockout" Prince. Prince Edward surrounded by celebrities helping him to launch the hardback edition of "Knockout: The Grand Charity Tournament" and "The Grand Tournament Game", Britain's first charity board gam...

The Duchess of Gloucester at the Berkeley Square Ball

Duchess of Kent on a sponsored bike ride for Children in Need in Anmer, West Norfolk

Prince Michael of Kent at a road safety scheme launch

Prince Michael of Kent and some of the showbusiness personalities who supported him when he launched the Prince Michael Awards scheme, a new campaign for road safety, in London today. With the Prince are, from left: Radio One disc jockey Mike Smit... 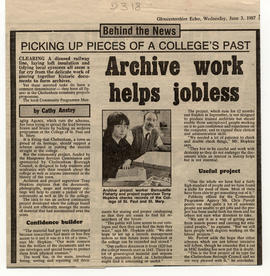 Includes photographs of "The Wrestlers", "Home Guard Training" and "The Rehearsal". Annotated with names. Photographer unknownAlso includes accompanying letter from John Taylor and reply from Adrian Quick of the Colle...

Photocopies of the census for Cheltenham Training College 1861-1891

Ashford, Kent. Viscount at Wedding. Viscount Linley and his friend Susannah Constantine walk to St Mary's church to join the congregation, including many members of the Royal family, for the wedding of Lady Amanda Knatchbull todayAgency: Pres...

The Prince and Princess of Wales's five year old son Prince William leads a pony near his home on the Highgrove Estate in Gloucestershire today, when he went riding with his younger brother, Prince HarryAgency: Press AssociationPhotographer: ...

Duchess of York and her mother at Wimbledon

Duchess and Mother at Wimbledon. The Duchess of York with her mother Mrs Susan Barrantes enjoy Centre Court action from the front row of the royal box at Wimbledon todayAgency: Press Association

The Duchess of York with Children of Courage

Flying Duchess. The Duke and Duchess of York with her helicopter instructor Kevin Mulhern discussing the Duchesses achievement of winning her "wings" at RAF Benson todayAgency: Press AssociationPhotographer: Ron Bell

Queen Mother and horse "The Thinker"

Cheltenham Gold Cup winner "The Thinker" has a quiet word with the Queen Mother at Cheltenham todayAgency: Unknown

Photocopies of prospectus photographs of St Mary's College and The Priory

Letters from May Fisher accompanying D369

Published in the Hampshire Chronicle. Includes details of commemorative ceremony 50 years later dedicating a plaque to the memory of Rowland Watson and his wife Cherry

Includes table of contents; biography of Keir Smith; description of "The Crypt of Revolutions", being a series of carvings on railway sleepers; drawings of sleepers; photographs of maquettes

Photocopy of article "Forest Workings: Open Air Art in the Forest of Dean" by Clive Caffall

Photocopy of article "Forest of clean"

Published in "The Mail on Sunday", author unknown. Includes photograph of the attempted cleaning of sculpture "Cathedral"