Coursework folder "Some Aspects of the Development of 9-12 year old children, with some reference to Secondary Education" by Diana Beal

Cover for the Ceremonial of the Investiture of Prince Charles

Cover for The Ceremonial of the Investiture of His Royal Highness The Prince of Wales at Caernarvon on 1 July 1969. At the top are the Arms of The Prince with Coronet, Supporters and Garter. Below is his Dragon Badge, different from that of the Qu... 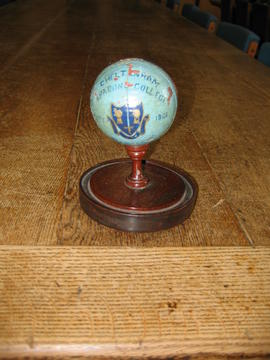 The huge crowd in Trafalgar Square watching the state coach passing on the return journey from the AbbeyITN Reference: ROYAL/GEOR/3Agency: Associated Press

Cutting from the Gloucestershire Echo reporting the new developments of St Paul’s College made possible by the purchase of Rosehill Estates. Includes comments made by the Principal, Mr E L Bradley

Cuttings from the Cheltenham Chronicle and Gloucestershire Graphic relating to the St Paul’s College Biennial Reunion 1922 and dedication of the War Memorial Window. Copy of letter from Principal Beck regarding reunion and list of “Roll of Honour”

This move met with opposition from the Old Students’ Association 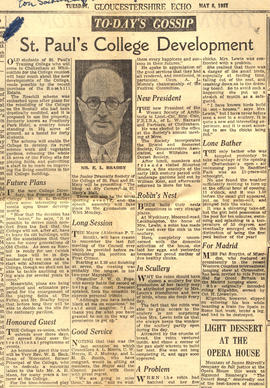 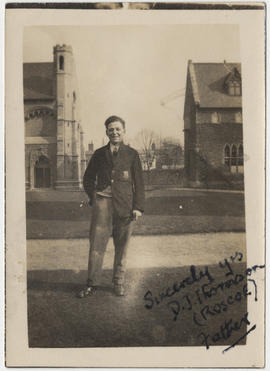 Includes letter from Nora Price accompanying D370 and letter from Bernadette Flaherty of the Archives MSC Project to Nora Price thanking her for her deposit, 9 October 1987

Cambridge Massachusetts. Dallas Pell, 25, daughter of Senator Claiborne Pell who was named as one of four Americans who might make a good match for Britain's most eligible bachelor, Prince Charles, relaxes in her apartment. Miss Pell, who att...

Danish Farmers presenting The Queen with a horse called "Macron"

"The Dubliner" and "Dublin" publicationsJames Elroy Flecker publications - 37 books, including an unpublished masters thesis, by and about the Cheltenham poetWhittington Press ephemera

Transfers Gibson to the Army Reserve. States he listed in the Royal Army Service Corps on 24 June 1916. Includes original envelope

Demonstration in front of the British Consulate in San Francisco

San Francisco, USA. This is the scene in front of the British Consulate on San Francisco's Pacific Avenue Thursday as demonstrators for a United Ireland awaited the arrival of Prince Charles. Police estimated about 500 were on hand with placa...