Possibly written by Martin Orrom. Describes the foundation of the Sculpture Trail

"Sculpture and Interpretation: The Forest of Dean Project" by Martin Orrom

Describes the foundations of the Sculpture Trail, specifically the Exeter Forest sculpture trail and the 1986 Forest of Dean project

Includes negative with image of "Stepping Stones" and four other views

Possibly written by Martin Orrom. Describes the Forestry Commission's involvement with the establishment of the Grizedale Forest Sculpture Project in 1977 and later Beginner's Way.

Typescript of talk about Jamie McCullough, possibly by Carolyn Black

Drafts of the outline proposal for the Stand and Stare project

Letter from Rupert Martin [Gallery Co-odrinator, The Arnolfini] to Martin Orrom regarding the press launch at the gallery on 20 June 1986

Handwritten notes "Sculpture and Interpretation: The Forest of Dean Project" by Martin Orrom

Details of special events during the Arnolfini's 25th anniversary year

Details of the Arnolfini's collaboration with the Forestry Commission

"Stand and Stare: Meetings in the Forest of Dean" written by Rupert Martin [Gallery Co-ordinator, The Arnolfini]

Descriptions of two meetings held between The Forestry Commission, The Arnolfini and potential artists in March and May 1984

Document by Rupert Martin on "Stand and Stare"

Discusses the Stand and Stare project to date and the collaboration between The Arnolfini and the Forestry Commission. Also mentions forthcoming gallery exhibition exploring the forest in contemporary art 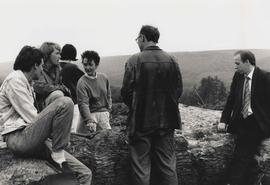 Photographs, possibly of the launch of the "Stand and Stare" project

Provisional list of artists under consideration for "The Enchanted Forest" exhibition

Document detailing the role of The Forest exhibition

Copy from "The Secret Forest of Dean" book by Fay Godwin

Includes revised foreword by Fay Godwin 20 March 1986; copy for the back cover with amendments; annotated typescript of introduction by Edna Healey with annotations; photocopy of handwritten observations by Martin Orrom; a copy of the finished book

Working file with details of Phase II of the Forest of Dean Project in association with Art Land Marks, opening on 17 July 1988

Application to South West Arts including summary of project to date [Phase I] listing works to date, the response, aims of Phase II, list of artists associated with Phase II, funding and comparative figures between Phase I and Phase IIAnnotated co...

Contact details for people and organisations associated with the Sculpture Trail

Written by Lesley Greene, Chair of the Forest of Dean Sculpture Trust

Written by Andy Fryers and Ros Daniels, Co-Chairs of the Forest of Dean Sculpture Trust

Administered by The Countryside Agency

"The New Forest of Dean Special School at Dean Hall"

Outline of the project to create the school

The Forest of Dean Sculpture Trust Access for All document

Referred to as "Appendix 14"

Information on the inclusion of the Forest of Dean Sculpture Trail in "sculpture parks: art and nature in europe: a guide" by the NMAC Foundation